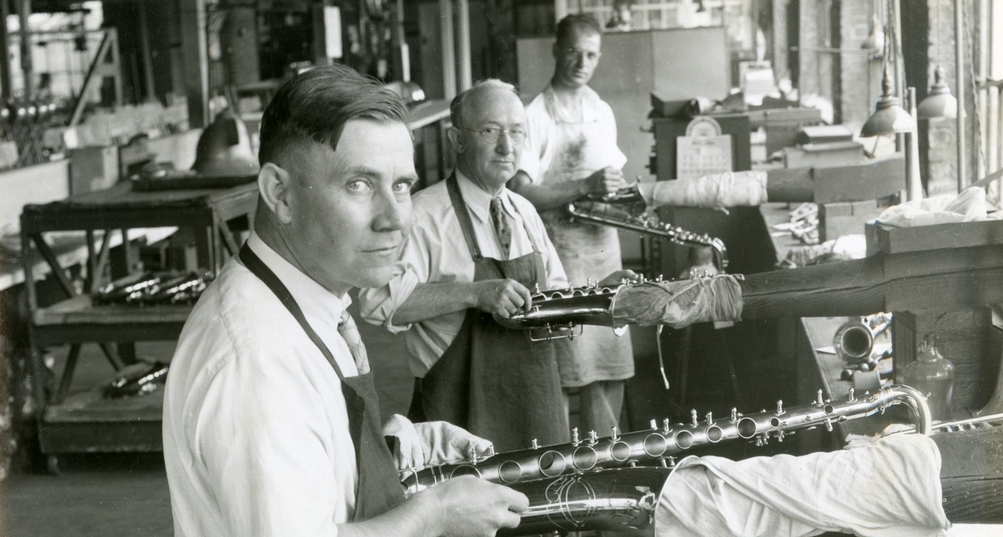 These three men sat next to each other in the Buescher Band Instrument factory hand engraving instruments for nearly 35 years. Two of them, fast friends, worked side by side for nearly 50 years at both Buescher and Conn. Here you see three photos taken 10 years apart in the Buescher engraving department, the first in 1923, the second in 1936 and the third in 1946. From front to back (1936 photo) are Harvey Earl Crawford (1886-1976), Edward Elmer Christman (1882-1954) and Charlie Joseph Terlep (1904-2000). Their artistry would help set a standard of excellence for saxophone engraving and contribute to many iconic instrument designs. 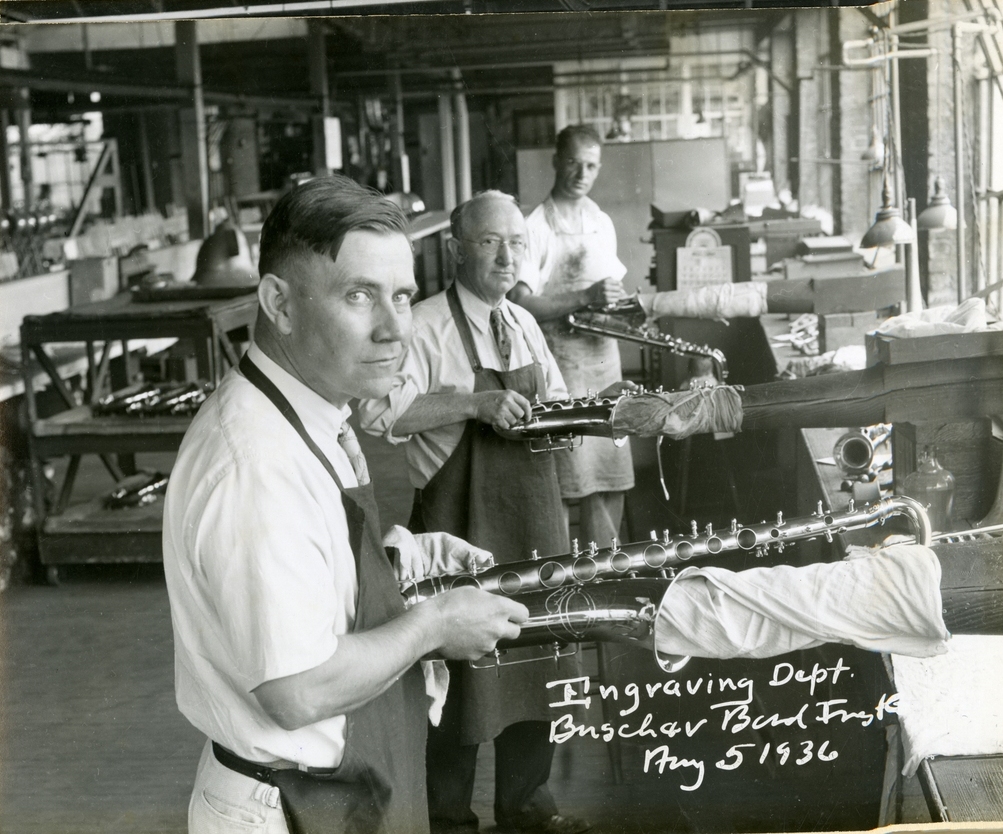 Master Engravers Harvey Craford, Ed Christman and Charlie Terlep (front to back) cutting the engraving onto Buescher Aristocrat saxophones for the Buescher Band Instrument Company in August of 1936.

In 1920, Charlie Terlep (farthest away - 1936 photo) began his career at the age of 15 as a reed worker in the Buescher factory. He began learning the craft of engraving at home from his father, Charles Terlep Sr., who immigrated from Austria in 1900. While learning the basics from his father as a teenager, Terlep honed his skills in the 1920’s under the apprenticeship of his elder co-workers, Harvey Crawford and Ed Christman. Tragically, his father died in 1923, just as the son was showing promise of becoming a master engraver. Terlep did indeed become a master engraver. According to Ron Semac (late instrument collector from Detroit), Charlie Terlep created the engraving design for Buescher’s flagship saxophone of the 1940’s-50’s, the Buescher 400 Top Hat and Cane. Ron told the story to me:

Sometime in the late 1970’s or early 80’s Ron drove to Elkhart to have Terlep engrave two factory unfinished Buescher 400 tenor saxophones that he had acquired. Ron had heard that Charlie Terlep was an old factory engraver but didn’t know much more than that. They agreed on the price: $20 per horn which Ron thought was quite a bargain, thinking that it would probably take a full day or more to engrave both saxophones. Upon his arrival and after a short conversation, Ron became distressed when Charlie pulled out his engraving tools, sat down with the horn between his legs and started to cut away at the bell of the instrument. Ron abruptly halted him and said, “No, stop!! I need this to be the exact engraving pattern as this example that I brought. Let me get it out for you.” As Ron rushed to unzip the case of his sample horn, he asked, “Don’t you need some sort of pattern?” Charlie let out the biggest laugh and exclaimed, “Ron, I created this engraving over 40 years ago and I’ve cut it onto ...…. I don’t even know how many thousands of saxophone bells in my lifetime. Asking me to use a tracing is like asking Picasso to do a paint by numbers?” and with a cheeky grin, Charlie Terlep went on to complete both saxophones freehand, taking about 45 minutes each. In the end, Ron happily paid the $40 and was in awe, remarking how he could not distinguish between the newly engraved instruments and the original that he brought with him.

As Ron retold this story to me many years later, his usual stolid exterior melted and he beamed with delight as he exclaimed how never in his life had he gained so much respect for a man in such a short amount of time as he did in the presence of Charlie Terlep.

With only a short stint at C.G. Conn from 1928-1932 (perhaps to further apprentice with Master engravers Julius and Charles Stenberg) Charlie would go on engraving instruments for Buescher until the Buescher company was bought out by Selmer in 1963. 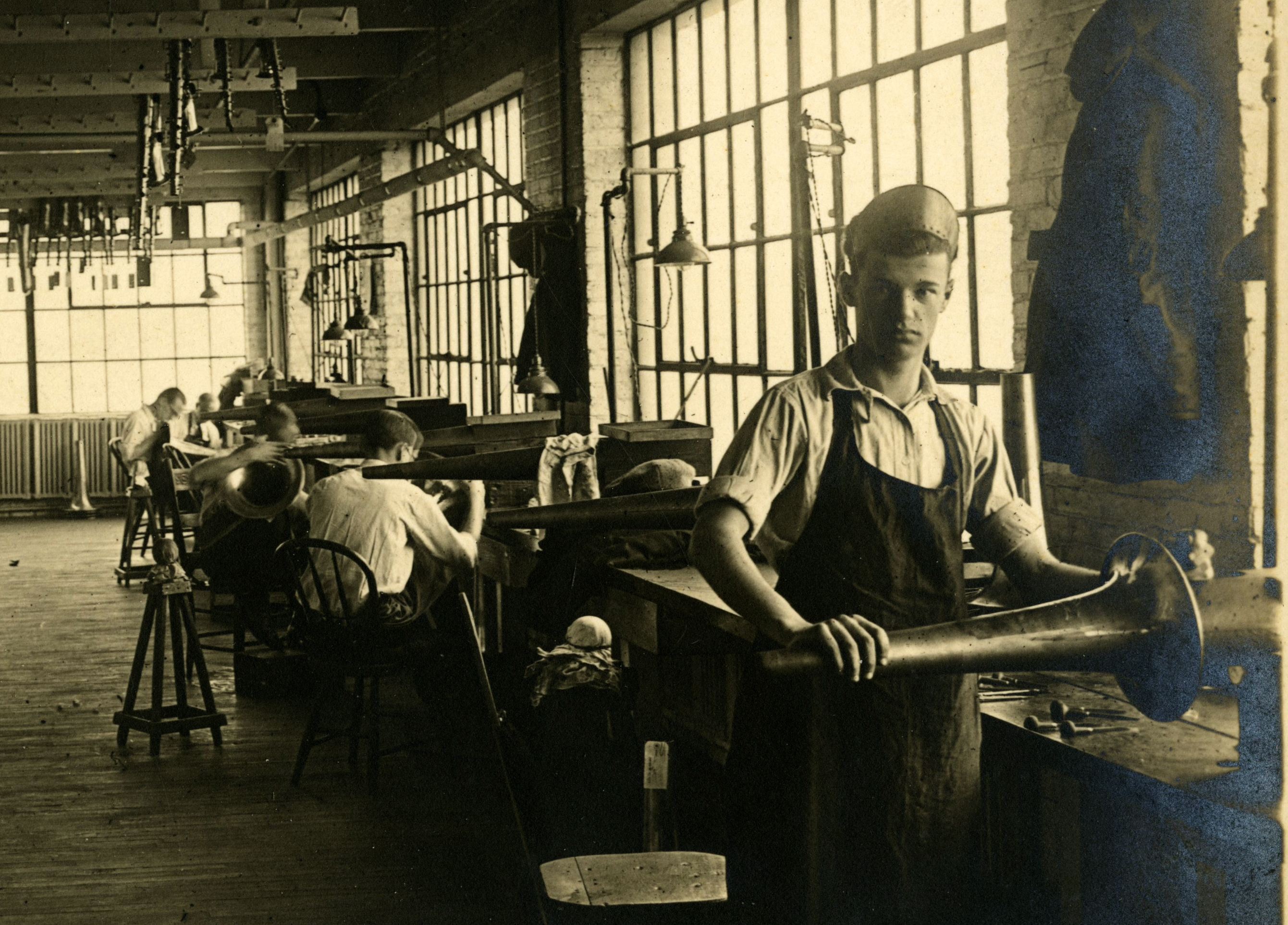 Charlie Terlep at age 19 working as an instrument engraver at the Buescher Band Instrument Company in August of 1923, only days after his father passed away. His mentors, Harvey Crawford and Ed Christman, can be seen seated directly behind him.

Harvey Crawford (forefront - 1936 photo) also started working in the band instrument factories as a teenager just after the turn of the century. The son of a farmer and possessing an artistic flair, Crawford was accustomed to hard work and quickly made his way into the engraving department of C.G. Conn by 1909. Here, he would have learned from the absolute best in the world including master engravers Julius and Charles Stenberg. By 1911-1912, he had developed his own engraving style and was recruited by Buescher. In 1912 he officially stamped his last Conn timecard and began wearing a Buescher employee name badge. He would stay with Buescher for another 50 years, retiring in 1962.

Terlep’s other mentor was Ed Christman (middle - 1936 photo). Right about 1900, like Crawford, Christman also started at C.G. Conn in his teenage years. He would have also honed his skills under the watchful tutelage of Julius and Charles Stenberg as well as Conn’s first master engraver, Jake Gardner. By 1903 Christman, recorded his profession as “engraver for C.G. Conn” in Elkhart’s City Directory. An office romance led to his marriage in 1905 to Maude Showers, a stenographer in the Conn front offices. They were both musicians and performed together regularly at church and at Conn employee gatherings. Christman also performed in a male vocal quartet with fellow engraver Harvey Crawford. In his younger years, he was known to tilt back the bottle a bit too much (as were some other engravers as old tales have told) which led to his arrest in 1914. After that incident, he thanked the judge for his just punishment and kicked the habit for good. Sometime during WWI, Christman followed Crawford’s lead and traded in his Conn apron for a Buescher smock. After he lost his wife in 1943, he continued engraving for Buescher right up until his death in 1954 ending a 50+ year career. 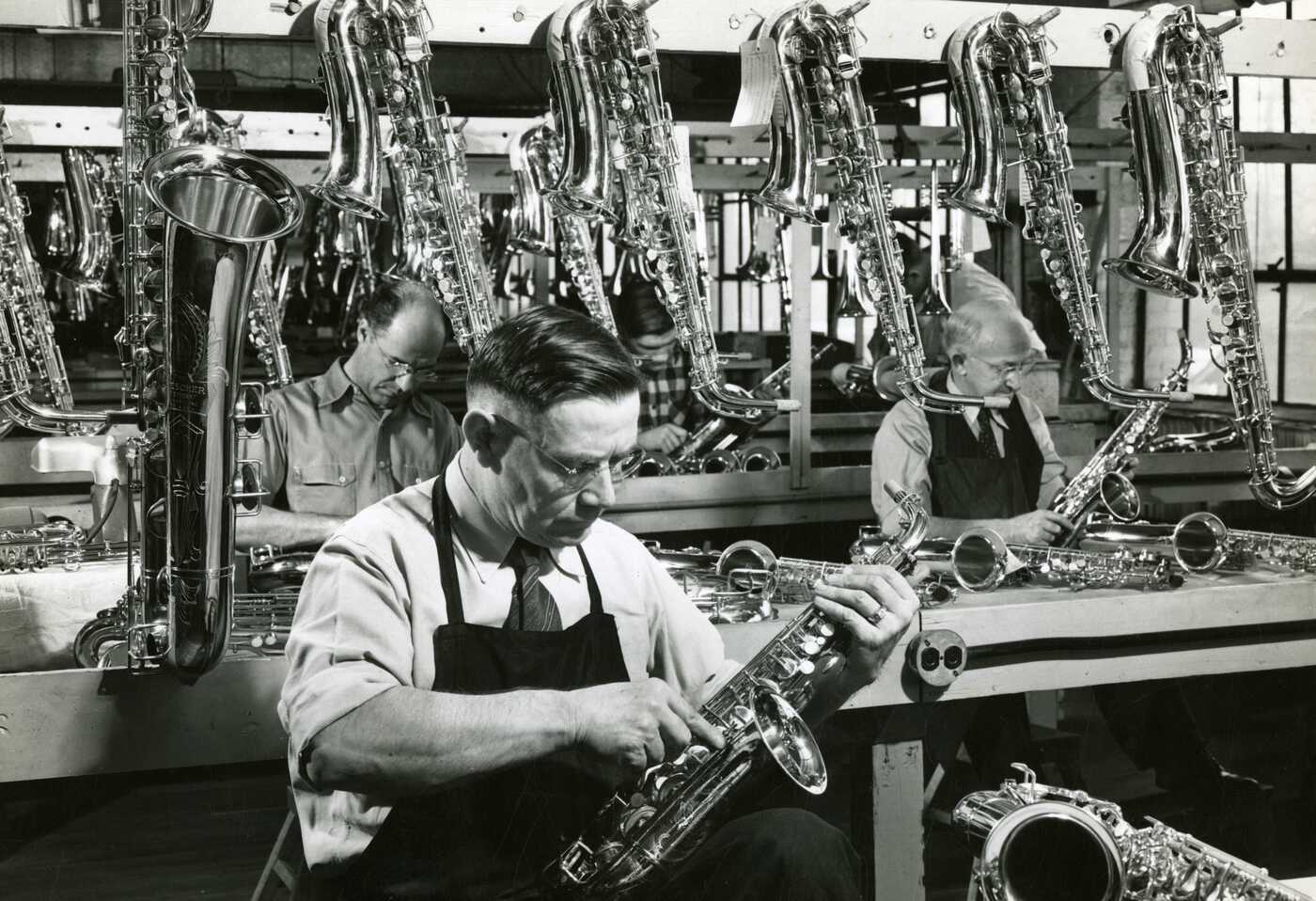 Buescher’s three top engravers still at it in August of 1946. In the forefront, Harvey Crawford engraves Buescher’s flagship saxophone, the Buescher 400 Top Hat & Cane. This engraving pattern was designed by Charlie Terlap (seated directly behind him). Seated to the right is Ed Christman, engraving a Buescher Aristocrat alto saxophone.

It’s difficult to quantify just how much value that these men and other engravers like them provided to the instruments they engraved and the companies they worked for. Their craftsmanship defined their company’s image by etching elegance and style onto the instruments they produced. Whether it be the elaborate floral engraving of the 1920’s or the art deco engraving of the 1930’s to the many varied designs of the 1940’s-50’s, the engravers created mass market appeal for the instruments they adored. It was said that the two founders of the American band instrument trade in Elkhart, C.G. Conn and Gus Buescher, each could make any musical instrument manufactured in their factories from start to finish……except for the engraving. Truly, the engravers were unique to the workforce – artists in every sense of the word - possessing a skill set that took years to master (much like the musicians who played their instruments).